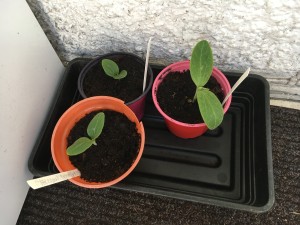 Joan brought round some courgette plants today. Courgettes and I have a troubled relationship. They are one of my favourite vegetable and there was a magic time, when I lived in the country when we were blessed by a positive cornucopia.

Our garden faced south and the courgettes were planted in gro-bags along the back of the house, where they were sheltered and could bask in the sun. The first year we had so many, we didn’t know what to do with them. They were cooked in olive oil, added to Bolognese sauces, with garlic, aubergines and red peppers they were made into ratatouille and even baked into cakes. I’d harvest them every morning and even so one or two escaped to grow into marrows, which of course were duly stuffed with mince and baked in the oven.

There was no point in giving them away, as our friends were also over provided and we were all sharing novel ways to use up our harvest.

The next year we grew fewer and the supply became manageable. All you had to do was to plant them out, keep them watered and they’d go on all the way through the summer and into the autumn.

Which lulled me into a false sense of security.

Courgettes are easy, I thought, when Mike and I moved into our house in Stoke.  And so I bought some seeds.

If there is one thing I am good at, or our dining room windowsill is eminently suitable for, is germinating seeds. The courgettes sprang up long before their due date. They quickly outgrew their pots and there was nothing for it but to put them outside.

Once in the garden, they languished, turned pale and like the consumptive heroine of a Victorian novel, they died.

I tried with a new crop. I tried them in pots, in growbags, in various different places around the garden and all I got was a few small courgettes, perhaps enough for one meal.

There was one year when it all worked brilliantly and there were enough to give away, but that was only once.

Meanwhile, Joan in her allotment across the road, was overrun.

I asked her advice, and that of other friends who never had any problems, but no one had an answer to my problem.

This year it was going to be different. This year I was going to have a greenhouse, but the virus intervened, so I’m pinning my hopes on Joan’s courgettes, planted out in the place where the greenhouse will be.