I never had a Wedding Dress

I never had a wedding dress. At least not the conventional sort. For my first wedding my mum made me a midi length dress and I wore a Juliet cap on my head. I did have a bouquet and I bought a pair of white satin shoes. I forgot to take the price off their soles so when we knelt down for the blessing everyone could see the sticker, which was probably no bad thing, because at that point my mum was on the verge of tears−tears which rapidly turned to smiles, when she saw the price tag.

We only invited fifteen people, which included family, my cousin took the photos and the reception was held at my parent’s house.

For my second wedding I wore an outfit which I’d bought for my fortieth birthday. It happened to be an off white, though I had flirted with the idea of something flowery, then changed my mind as we married in November. I had no flowers and only Mike and our kids came to the registry office and the lunch afterwards.

Both weddings were exactly what I wanted. Small and intimate. And it didn’t matter what anyone wore.

Though I do sometimes wonder whether going down this path has left me with a deeply supressed desire to have had a “proper” wedding.

I say this because wedding dresses do tend to feature in my novels and short stories.

The story of finding a vintage wedding dress was the initial inspiration for “Belvedere Crescent.” I thought about the first bride to have worn it and whether what happened in her marriage would have repercussions on the generations of women who came after her.

The book didn’t quite work out that way. The house became increasingly important, as did the relationship between identical twins Thea and Sadie, but the wedding dress still played a part. 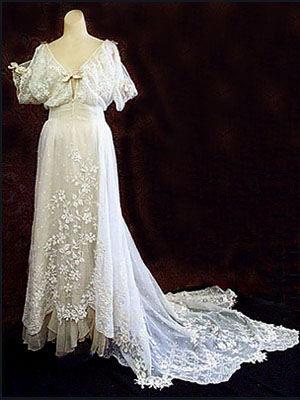 “A slim white column of silk and lace, with a high waist and train that had been carefully looped up over the hanger to prevent it trailing on the floor.” Thea finds it in Great Aunt Jane’s wardrobe and,

“It was so beautiful I could not resist taking it out and holding it up against me, then trying it on. The silk slid easily over my head and shoulders. I had to twist my arms and neck to fasten the buttons that ran down the back, but I managed enough of them to give an impression of how the dress would fit and straightening the train, I turned to look in the mirror.

The black line of my knickers showed through the delicate material and when I moved there was a trace of mothballs, or was it camphor. But the dress looked good and if there had been someone to help me with the buttons it would have been a perfect fit.

It is a perfect fit on the girl who looks back at me in the mirror. The girl who is not Thea, whose eyes shine with happiness, whose dark hair is pinned, in an elaborate style on the top of her head and decorated with a wreath of flowers. A rope of pearls hangs from her neck and there are more pearls in her ears.

“Today is the best day of my life,” she murmurs and, as the image faded, I was suffused with a feeling of joy and expectation.

I caught hold of the train and holding my head high, twirled around. The dress had been waiting for me. William with his love of vintage would adore it. I would carry a bouquet of lilies, or would roses and stephanotis that would be more true to the period? I would have to google it. I had to get my laptop, I needed to make plans.”

Do I regret not having my long white dress and veil? My posse of bridesmaids? The big reception and evening party?

Not for a moment. I did things my way. I enjoyed both my wedding days and would not have wanted anything different.

“Belvedere Crescent” will be published on February 28th on Kindle, Apple and other digital formats and in paperback at