How Many Pairs of Boots Does One Woman Need?

Now that is a very good question. As far as this woman is concerned I have, currently, about eighteen pairs in my wardrobe.

This may sound rather a lot, but my boots go back a long way. The oldest pair I have dates from the early seventies. Maroon lace-up Victorian style, they came from the theatrical shoe makers Aniello and Davide and although designed to wear on stage I’ve worn them in the same way, I’ve worn my other boots. They’ve lasted better than other pairs and for much longer than their sister pair in black.

They were the pair I wore when pregnant with my second child, I went to visit my sister in hospital after she had had a narrow escape from a house fire. Aunk and the maroon boots, and indeed David, are inextricably linked and it would be almost impossible to get rid of them.

The same is true of the green Italian boots which I bought with my first royalty cheque. I was teaching drama at the time and since it was almost impossible to find suitable plays for schools that involved a large cast, I wrote my own. Carel Press, an educational publisher, was looking for material and, taking a deep breath, because I’d never submitted before, I sent off “The Last Disco”. They took it and subsequently published “The Kidnapping of Cloud Nine” which I wrote with Posy Miller. For years we got royalties and performing rites from both plays, but my very first payment was celebrated by buying the green boots. Made from the softest leather with velvet trimmings they are blissfully comfortable. 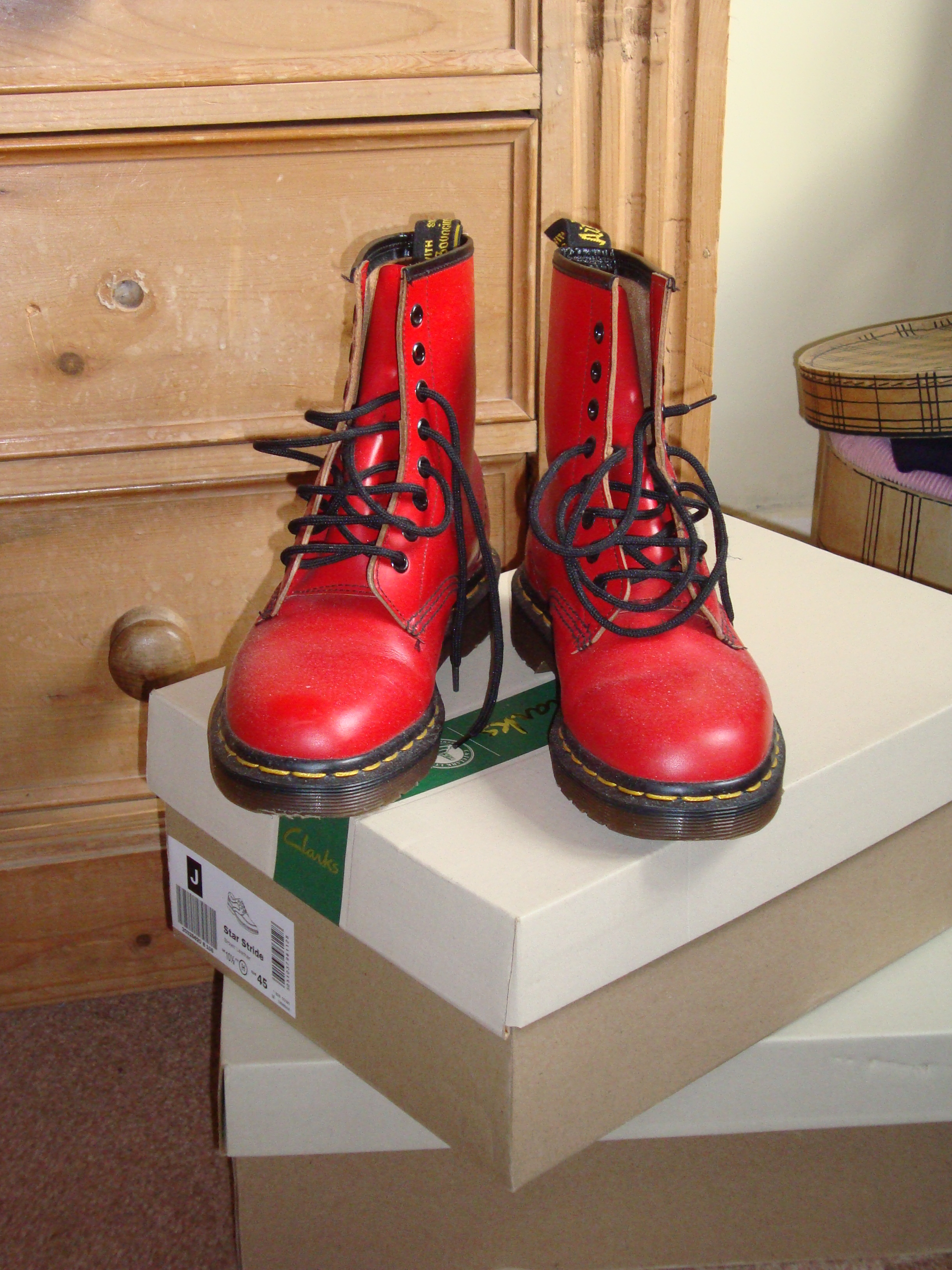 My red Doc Martens were a present from my kids, my multi-coloured boots were bought for me by my husband. Then there are the brown boots with the buckles that one of my pupils gave me, because I’ve got size 3 feet and so had her twin and her twin didn’t like her new boots, so would Miss like them?

And so it goes on. Every pair I own has a story. Even the wellingtons with their tops chewed by one of our Water Spaniel puppies.

Do I need them all? Probably not, though some are useful, some merely beautiful, like the purple ones with ribbons, some both, like my rainbow boots, I wouldn’t part with any of them.

And if this all makes me sound just a little obsessed with boots, then I would have to confess that I am.