Today is Posy’s forty-sixth, birthday. Or rather should I say, would have been. The exact terminology is difficult here. Although she died in 2001, in so many ways she is still part of us and definitely part of our lives. So although she is not here to celebrate with us, we will be raising a glass to her and reminiscing. What will make this celebration extra special is that that we will be sharing it with her great friend and companion in devilment, Jonathan Clarkson.

The stories he can tell, I will leave up to him, what I’ve been remembering, is how Pose achieved her ambition to play Juliet.

It began with a conversation. She was visiting us in Jamaica and we had been to Port Royale, once the pirate capital of the Caribbean only the ruined citadel remains, but she saw it as the perfect setting for “Romeo and Juliet”. At the time Pose had no funding, no company and only a couple of actors she knew she could call on for her project. Nothing daunted she allied herself with Jim Malcolm, the deputy High Commissioner, and a good friend of ours, and together they hatched a cunning plan.

The upshot of which was a tour of the island by In Cahoots, Posy’s newly formed theatre company. While she went back to the UK to audition fellow actors, Jim set about funding from the Arts Council and finding venues and accommodation for the company.

They arrived on a hot, steamy Jamaican night, on the ten o’clock flight from London. As well as their luggage, they had a box of swords, which Jonathan insisted looked like a coffin for a dwarf. Special clearance had to be given to bring these dangerous weapons into what was at the time the murder capital of the world. Once safely through customs, the tour could begin.

There were performances in schools, hotels and the Edna Manley Theatre in Kingston, which was an open air amphitheatre. This was my first experience of Shakespeare in Jamaica and I loved the way the audience was totally involved. They cheered, they clapped, they called out warnings and advice to the characters.

Down Town Kingston was another experience altogether. Because at the time there was much violence between rival political factions, the actors were driven there in convoy, guarded by police. As we reached the boundary between New Kingston and Down Town, the lead car stopped, the driver got out and fixed a Union Jack on the bonnet. Being British we could pass safely through the worst areas, but even so, the route was lined with armed police and half way through the play the Inspector came in with his AK47 to check that all was well.

Once again the audience was brilliant and the headmistress and staff so grateful that the actors had come to their school. Not that a little matter like gang violence would have stopped Pose. If it was at all possible then she would do it.

In direct contrast was the performance at Half Moon Hotel, where the actors had their own villa, plus maids and a cook and butler. The house had its own pool and there was skinny dipping at midnight and horse riding along the beach at dawn.

The most magical evening, for me however, was at the High Commission where on a balmy tropic night the tragedy of the two young lovers was played out on the veranda of the old colonial mansion. 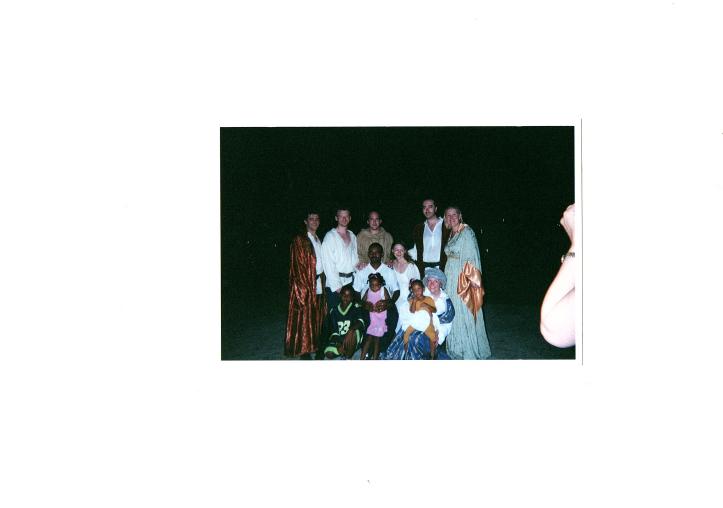 There will be no more outdoor Shakespeare, no strange plays in little theatres, or appearances at the Edinburgh Festival.

But Pose being Pose, this is not the end of the story. After she died, her friend Guy made a film using clips for a project that was to be pitched to the BBC.

Sam Jackson’s Video Diary, is out still out there and has recently been re-mastered. If you want to see her again, or just get a flavour of the woman she was.  Click HERE.