In the middle of my crib scene every Christmas there is a unicorn. There is no biblical evidence for including this creature, but for me it fits perfectly. Unicorns are magical, if not spiritual beasts and there is a long tradition of linking the unicorn with the Virgin Mary. 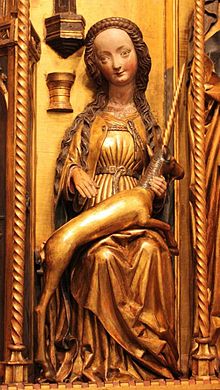 In this picture of the annunciation, the unicorn is being held by the virgin herself and this link with unicorns and virgins is the one most people would know.

Why that should be so has always fascinated me. The unicorn is untameable and wild. It can only be captured by a young girl, going alone into a forest, sitting down and waiting for it to appear and put its head in her lap. So do the legends symbolise the power of virginity over lust, or perhaps over magic?  Both were feared as a threat by the Medieval Church, which seems to have turned the unicorn into a representation of love; it also stands for loyalty and love in marriage.

Softened the unicorn becomes harmless. Nowadays it’s a cuddly cute, sometimes winged creature who is far too plump to fly, or even canter at any great speed.

It is time then to reinstate the unicorn to its rightful place in the pantheon of mythical beasts. Unicorns are wild and unpredictable. They kill the knights who are sent to hunt them down. They don’t grant wishes, or give kids rides on their backs. And they can be evil.

Not all unicorns are white, in fact very few are, as white, outside the polar regions is an anomaly. The white unicorn, with the silver horn, is the albino, the outcast. The true unicorn is the black, one horned beast that roams the forests of your mind and whose eyes glow red through your nightmares.