Is Young Adult the True Future of SF and Fantasy? 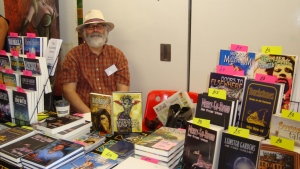 Is young adult the true future of SF and Fantasy was one of the topics of discussion at Edge Lit yesterday and as a writer of YA, “Clear Gold”  this was a panel I had to attend.

Like me, most of the speakers had grown up before the YA genre appeared and we read writers like John Wyndham, Daphne du Maurier and of course the Brontes. If we wanted something really racy there was Shirley Conran’s “Lace” with the infamous goldfish scene.

Now of course the publishing world has totally changed and there’s a plethora of books out there aimed at a somewhat vague age range. After all who is a young adult? A thirteen year old who might be reading Dickens, or an eighteen year old who last opened a book when they were doing their GCSEs?

This lack of definition can be a problem for a writer. How much sex, violence, drinking and swearing is appropriate for your readership? What kind of issues can they, or do they want to deal with? Is their a need for self censorship or does anything go?

In my opinion there is need for caution. Especially for the younger readers in this group books are often chose for them by adults and these adults want to know that the subject matter and language are appropriate.

Speaking personally, I wanted to get away from the romantic/hot sex slant that many of these books have because if all my main character is concerned with is whether she’s getting the guy or not, it limits her choices and her actions.

I wanted to write about a girl who was free, a girl who might be called Mouse but who had the spirit and courage to take on her world on her own terms.

PS And the guy with the great hat in the picture? Peter Colborn of the award winning Alchemy Press and Penkhull Press